To warm up for DEFCON quals, my team and I decided to give PlaidCTF a shot. We knew it was going to bring some hard, fun challenges, and it did not disappoint.

I immediately jumped into my comfort zone by tackling a pwn challenge, and got my first flag of the weekend. The exploit was pretty cool, and I seemed to have used a different solve than was intended, so I thought I'd share.

When the application is run, it asks you to name your shop. Afterwards, you are free to invoke any of the following options as much as you'd like:

Items are stored in a singly-linked list, with a global variable last_item pointing to the final item in the chain. Each item points backwards, until nullptr. In addition to the list pointer, each element contains a char[4] identifier, two name strings, and a float price. The structure is essentially this:

After passing that check, we arrive at the main portion of the code: 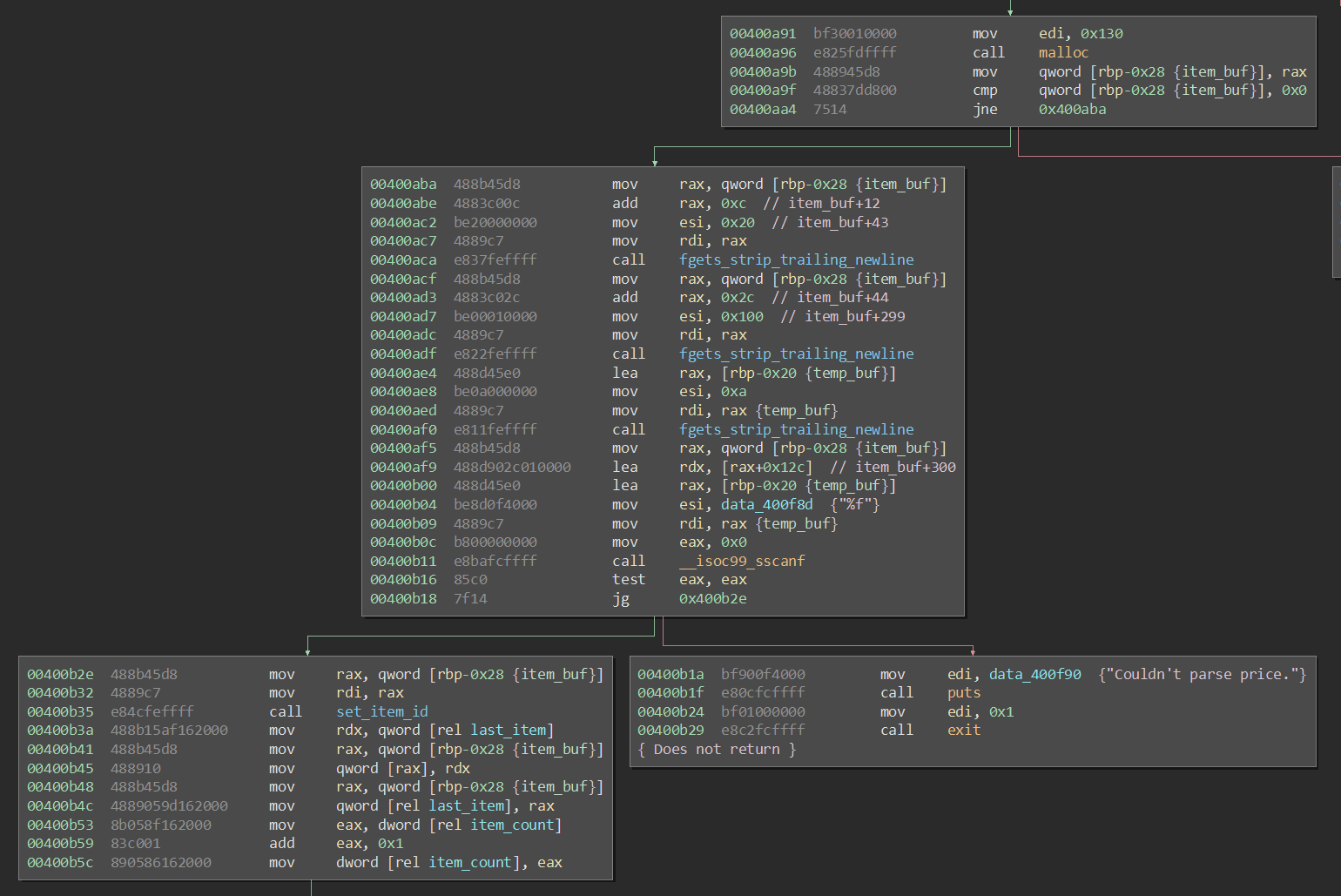 Notice that the elements are malloc()d. Also notice that when adding an item, we can specify everything except id, which is set by set_item_id(). This function reads a 2-byte string from /dev/urandom, loops over each byte, and sets id to the hexadecimal string which represents these two bytes (4 chars, no null terminator). id remains hidden to us, but we know it must be between %x % 0x0000 and %x % 0xFFFF . Here's the code inside of the loop: 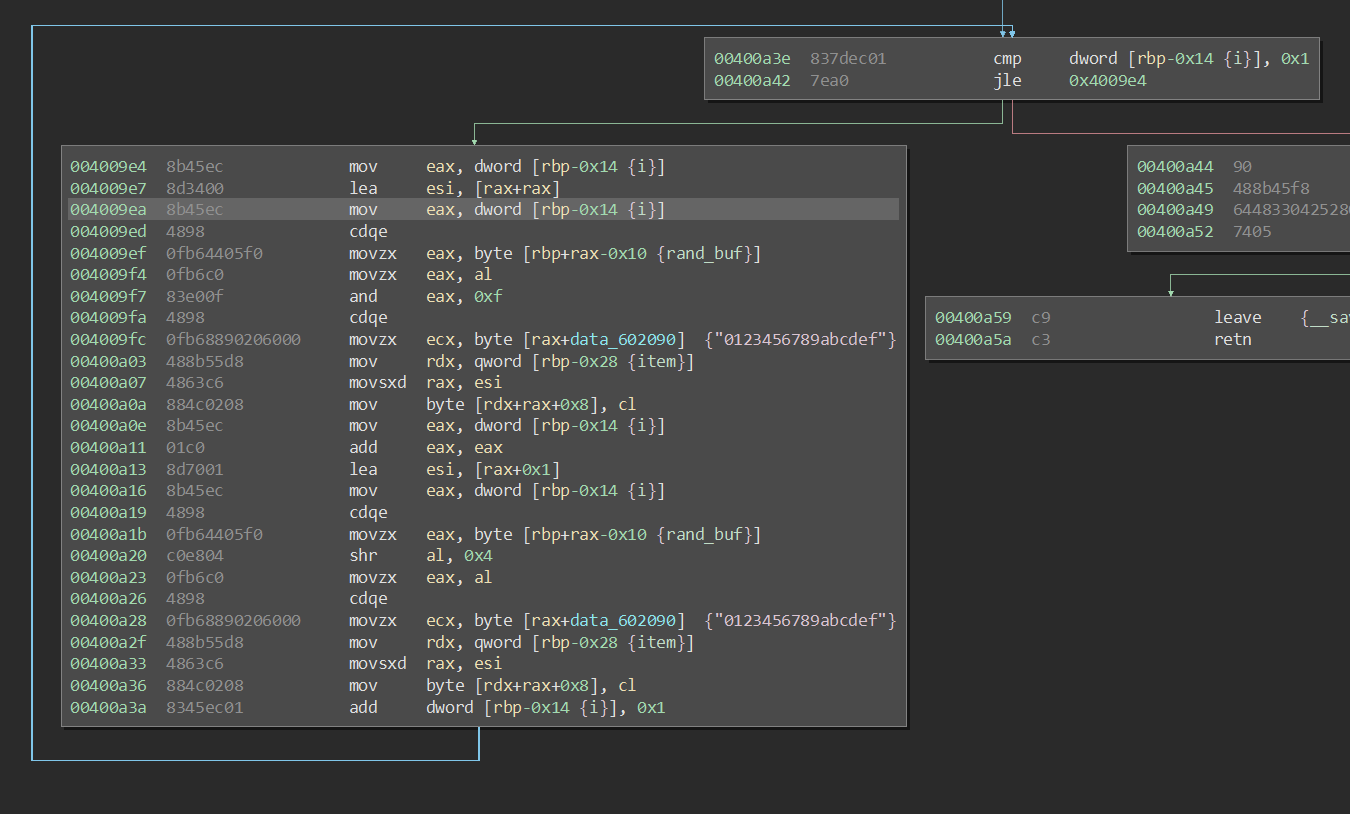 This function is quite simple. It grabs the last item in the list, loops backwards, and prints <short_name>: <price> - <long_name>. The code that does this isn't interesting, but the behavior can be used to leak information in our attack.

This simply lets us rename our shop. This wouldn't be entirely useful, except for the fact that the shop name is stored in a 0x130 byte buffer created with malloc(), which is pointed to by a global variable shop_buf placed immediately following our checkout cart. This will be important later.

Checkout looks pretty complex, but the function boils down to three main behaviors:

The assembly code isn't really relevant, as there's no interesting behavior or bugs there. What is relevant, however, is the cart array:

You'll notice there are 4 items per row (first item in first row is offset only because it's named) with 8 rows, yielding a total of 32 items slots in the cart. If you're sharp, you might have already figured out what's next.

Because add_item() uses jle pre-increment, it allows us to have an initial total of 33 items. If we then trigger checkout() with search_buffer containing all 33 item identifiers, we can overwrite shop_buf to point to item[0]. From there, we can use rename_shop() to modify item[0]->prev_item, expanding the item list to an arbitrary location and yielding a write primitive.

This is the gist of what any exploit will do, but there are multiple ways to weaponize this behavior. Here's the route we're going to use:

First, we will create a list of 33 items. Upon each item addition, we will use binary search find the exact id of each item via checkout(). Because binary search is O(log n), this is pretty fast. We can check about 13110 possibilities per request, separating each potential id with a comma so that cycles don't mess up the search.

The search happens anywhere in the buffer with absolutely no alignment, so having 00001000 instead of 0000,1000 could confuse our search, since id 0001 could match even when it's not in the search set. This actually plays into how the challenge was meant to be solved, but that doesn't matter for our attack.

Next, we checkout all 33 items. This causes an overwrite of shop_buf to point to items[0].

Global scope contains a pointer to stdout (actually, _IO_2_1_stdout_), which points to a location relative to libc.so. This means that, if we can leak this value, we can calculate the address of libc.so. Luckily, the memory layout is perfect. The 12 bytes before stdout are all 0x00, so it will look like a valid item with prev_item as nullptr and id as 0x00000000. Using name_shop(), we set items[0]->prev_item to stdout_pointer - 12.

With our fake item in the list, we call list_items() to display the value in stdout_pointer as the short_name for the fake item. We'll use this later.

This is where it gets a bit messy. In Linux binaries, there is a table called the Global Offset Table. Essentially speaking, it contains pointers to library functions which the binary needs to operate. Our main goal is to replace one of these pointers to point to system(), but we're not there yet.

Immediately before the first element in the GOT is a pointer to _dl_runtime_resolve_avx. Once again, we use name_shop to add a fake item, this time replacing our previous fake rather than extending the chain. We point this fake object at _dl_runtime_resolve_avx_pointer - 44. We're lucky enough that these bytes will all be 0x00, meaning the item will appear fine.

There was no need to do both this and the stdout leak, as both are relative to libc.so. I could have calculated this value from stdout, or skipped stdout and used this value instead. However, I had already written the stdout leak before realizing this was the path I would take, and it takes more time to remove it than to go with it. Also, at the time, I thought this value was relative to ld.so, not libc.so.

After some quirky setup steps, we're finally ready to begin the meat of the 'sploit. We now know _dl_runtime_resolve_avx. Let me rephrase that: we now know the 8 bytes before GOT. Using a third name_shop() call, we create a fake item which points to GOT - 16. prev_item will point into some library, but that's okay, because our exploit will completely execute before the code ever walks the list that deep. Additionally, id will be the first 4 bytes of our leaked _dl_runtime_resolve_avx.

Checkout - GOT a Write Primitive

Next, we rebuild the GOT. This is its shape:

There are a few more steps before triggering the exploit, so we need to keep _dl_runtime_resolve_avx, fread(), strlen(), printf(), and fgets() in tact. Remember, we leaked the address of libc.so, so it's trivial to know the addresses for these functions.

One last consideration is that invoking checkout() calls memmem(input, item) for each item when building the cart, and that makes it the perfect function to replace with system().

So, we trigger name_shop() to rewrite the GOT, keeping the aforementioned functions correctly pointed and replacing memmem() with system().

Finally, it's time to get a flag. We invoke checkout(), and provide a search_buffer of /bin/sh. Then, when memmem() is called, our GOT overwrite causes the call to actually find it's way to system(), giving us a shell. 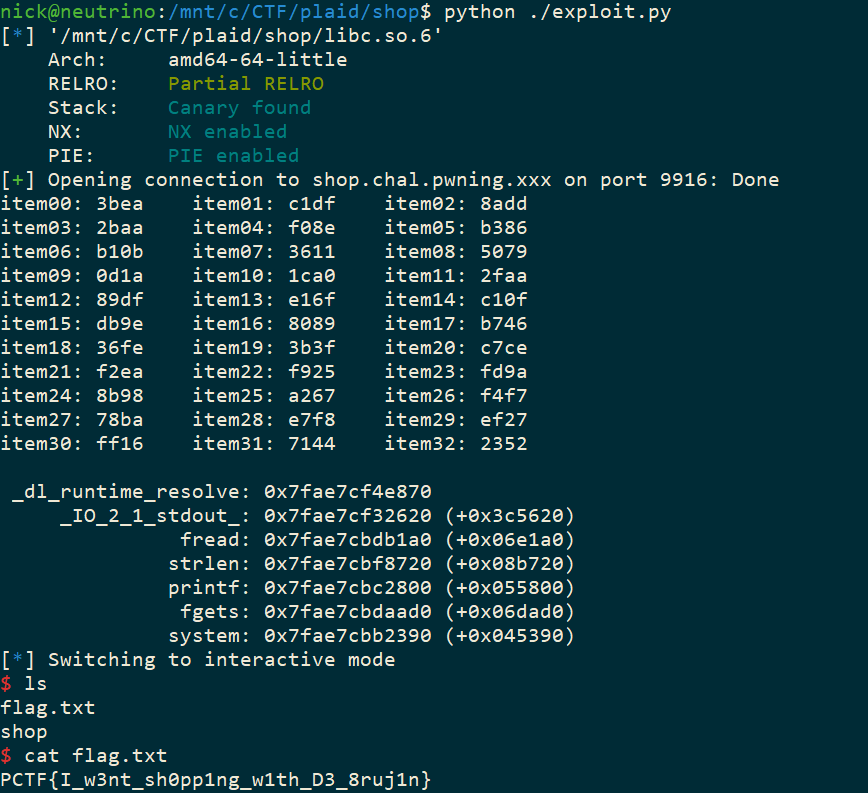 The full code for the exploit will be at the end of the post.

When playing a timed CTF, sometimes you have to ignore optimizations and work with good-enough so you can get flags faster. As I write my exploits, though, I take mental notes of what could be better.

When a binary search begins, the halves contain 32767 and 32768 items. Each query can only search 13110 items, meaning there are multiple sub-queries that happens on the first and second rounds of the search. Effectively, this is a pseudo-binary-search

A more efficient algorithm would highlight which region of a query was matched based on which sub-query returned, allowing the binary search to further reduce the search set to only the subset which matters.

Instead of searching for the id of each item, the search could kick in after creating all 33 items. It could start out searching for item[0] as usual, but it could track any other items which appear along the way. Each time an extraneous item is seen, the bucket-of-possibilities for that item could be reduced. Then, when it's time to search for that item, the search would start at an advantageous position.

When coded right, the first step on the first search would eliminate the first step for all other searches. This effect would compound on deeper levels as more items are searched for, potentially saving a lot of time by the end.

Sometimes, the binary search was failing. I never figured out why, I just tried reversing the order of the values which actually worked in the failure cases. Properly fixing it could remove re-searching upon failure, but I didn't have time to debug it.

After getting the flag, I realized this challenge was meant to be solved using a De Brujin sequence. Essentially, using a 65552-byte De Brujin sequence with the right values would yield a search_buffer able match every single item. This allows us to solve the challenge without knowing any identifiers, but it would break the exploit we used, as it sometimes requires omitting one item from checkout.

Both methods can be combined, though, and the exploit would be much faster and work the same. Essentially, Binary Search could be used to locate a single item id. Then a De Brujin sequence could be used, and the occurrence of id could be replaced when need be. This would actually break the sequence, but the chance of another item's id being adjacent is extremely low. However, if I was going to use a De Brujin sequence, I would just re-write the exploit to not need the single item omission.

Another CTF down, and less than a week before DEFCON quals. I certainly learned a lot from PlaidCTF, and had quite a bit of fun in the process. This wasn't the hardest challenge I've faced, but it was unique in the way the overflow and the linked list interacted. One final note is that I actually get excited when I realize I solved a challenge a different way than intended, because it means I've both managed to circumvent expectations and learned about the intended solve after-the-fact.

I hope you enjoyed the write-up! Feel free to discuss in the comments.

All-in-all, the exploit code works out to 220 lines, partially due to the generous amount of comments. Here you go: